The official opening of the Walt Disney World Resort occurred on October 1, 1971. On this day, Magic Kingdom opened its gates for the first time, along with the Polynesian Village Resort and the Contemporary Resort.

But, the real answer to the question “What year did Disney World open?” is a little tricky because Walt Disney World consists of theme parks, water parks, resorts, and a shopping district that have all opened up on different dates over the years.

And let’s not forget, since Disney World first opened their doors in 1971, that means that they will celebrate their 50th anniversary on October 1, 2021.

The 50th anniversary celebration, titled “The World’s Most Magical Celebration,” is scheduled to last until April of 2023.

Read about what to expect in our Complete Guide to the 50th Anniversary Celebration at Disney World.

Want to see when some of your other favorites at Walt Disney World opened up?

Take a look at the timeline below!

After the initial opening of Walt Disney World in October 1971, many new resorts, parks, and experiences opened over the years.

Epcot was the second theme park at Disney World, opening 11 years after Magic Kingdom on October 1, 1982.

This was followed by MGM Studios (now called Disney’s Hollywood Studios) opening on May 1, 1989 and Disney’s Animal Kingdom on April 22, 1998.

There are currently two Disney water parks on property. The first, Typhoon Lagoon, opened on June 1, 1989 and boasts one of the largest wave pools in the country. Blizzard Beach, the other Disney water park, opened on April 1, 1995 and is themed to a melting ski resort.

In addition, the Disney World resort has expanded from 2 resorts to include over 25 different on-site resorts, Each is impeccably themed and there are options to fit any budget and preference.

Lastly, Disney World has a fantastic shopping district that originally opened in 1975. At the time of opening, the district was called the Lake Buena Vista Shopping Village.

The shopping district has expanded and experienced plenty of change over the years since its initial opening. After being called Downtown Disney for quite some time, it is now known as Disney Springs and features world-class dining, shopping and entertainment. 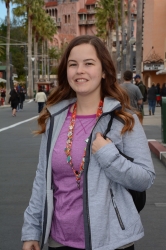 Felicia Goodwin
Felicia has combined her technical background (B.S., Management Information Systems, work as a Systems Analyst and IT Project Manager) with her experience planning dozens of trips to Disneyland, Walt Disney World, Universal Orlando, Disney Cruise Line, and Disneyland Paris to keep the content on the WDW Prep site updated using various tools and systems to make it as easy and accurate as possible. Email Felicia