It may feel like Walt Disney World’s 50th anniversary is all anyone can talk about (along with Halloween and holiday festivities), but what else is happening at the most magical place on earth?

In no surprise whatsoever, a lot!

There are so many other things – like shows and dining – that are either new to the parks and Disney World Resort hotels or are returning very soon.

When it comes to Disney Parks news, well, sometimes it’s information overload. That’s where we step in!

We want to make sure you don’t miss one detail (no matter how small), especially if it relates to an upcoming or current trip.

So, let’s take a look at what you can expect at Disney World in the near future — besides the 50th anniversary celebration.

The show was initially set to premiere in spring 2020, but, of course, the ongoing pandemic delayed its opening.

But, that all changes come this fall!

Drawn to Life looks quite spectacular and sounds like it will be an emotional show. It tells the story about the love between a father and a daughter, while drawing inspiration from Disney’s 100-year heritage of animation.

As Disney describes it, “The family-friendly show brings timeless Disney stories and characters to life in an unforgettable way through the use of innovative design, acrobatic performances, dazzling choreography, musical scores, brand-new animation lovingly created by Disney Animation artists, and some extra touches of Disney magic.”

You can purchase tickets online.

This isn’t the only entertainment coming to Disney World in the near future. See what’s slated to open in 2022 at Animal Kingdom.

If you haven’t heard yet, Jellyrolls at Disney’s Boardwalk Resort is set to reopen in mid-October!

On Sept. 10, one of the piano bar’s performers, Scotty Kilwein, made the exciting announcement on Facebook.

Jellyrolls is a very popular nightspot, where two piano players perform different songs. It’s fun and has a great atmosphere.

Because it is so popular, you definitely want to plan in advance and make sure you arrive at a decent time to snag a table.

This spot is for guests 21 years of age and older. There’s also a cover charge. We’ll be sure to let you know an exact reopening date when it’s announced.

We put together a complete list of what’s currently open at Disney World Resort hotels. Check it out!

There’s a new Table Service dining spot to experience! It is none other than Steakhouse 71 at Disney’s Contemporary Resort.

Steakhouse 71 opens on the first floor on Oct. 1 where The Wave was formerly located. You can now make reservations.

Breakfast, lunch, and dinner will be served. There’s also a lounge menu available at the Steakhouse 71 Lounge. Some of the offerings are even a nod to Walt Disney, but with a “contemporary spin on some of his favorite foods.”

There are also a range of specialty cocktails, including a Tequila Sunrise. Steakhouse 71’s version has a “modern twist” with tequila, tropical juices, rosemary simple syrup, and house-made grenadine.

FYI: you can order a “sharable” Tequila Sunrise for lunch and dinner that serves 2-4 guests.

The restaurant’s name comes from the year the resort opened and will have a “sleek yet comfortable décor with fun design elements from the ’70s and hints of our Florida heritage with subtle sightings of the beloved Orange Bird and citrus groves.”

You can browse all of the menus and prices online or via the My Disney Experience app.

In other important dining news, don’t forget that Space 220 finally opens on Sept. 20 in Epcot next to Mission: SPACE.

Here’s what you need to know about dining (and all of the changes at Disney World).

New and returning dessert parties and dining packages are making their official comeback!

There are three dessert parties at Magic Kingdom, one dessert cruise on Seven Seas Lagoon, two dining packages at Epcot, and a rooftop celebration at California Grill.

Most of these begin in October. Here’s a brief price breakdown:

Be sure to read all about the return of dessert parties and dining packages at Disney World. There’s a lot know!

I bet you forgot about this news!

A new scene dedicated to Pixar’s Coco is coming to Mickey’s PhilharMagic at Magic Kingdom on Nov. 12, 2021.

This particular scene will center around an “Un Poco Loco” musical number. The new scene premiered at both Disney California Adventure and Disneyland Paris on July 17.

This addition of Coco “marks the first time Disney and Pixar animators have worked on a creative endeavor where characters from both animation studios will be seen together on screen.”

Also, one of Coco‘s original composers, Germaine Franco, will produce a Coco score for Mickey’s PhilharMagic.

Since this supposed to debut sometime during the 50th anniversary, we have a complete guide for the milestone celebration.

This technically isn’t Disney World news, BUT, how could I not include Marvel’s newest Disney+ series?

As a big Marvel fan (and you might be too), this definitely deserves to be included in something we Disney fans have to look forward to.

The trailer premiered on Sept. 13 and if you haven’t seen it yet, be sure to give it a watch (above)!

Ever thought about what you should watch on Disney+ before you visit Disney World? We have!

Other Things To Look Forward To At Disney World

There’s so much more exciting stuff to experience at the most magical place on earth.

As always, we’ll keep you apprised of any and all new Disney World information! 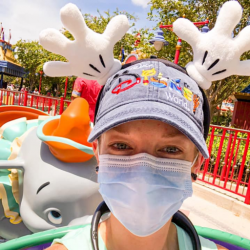